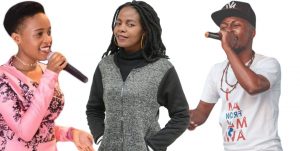 Two of the country’s young entertainment pundits have weighed in their views on the opportunities and challenges in the Christian urban music industry as fans gear up to nominate the 2020 Urban Music People (UMP) Awards Best Gospel Act.

The views from Journalist, Russell Chimbayo and Writer, Wonderful Mkhutche come months before the end of a year that has been one of the most hard-hitting in recent memory with the global pandemic, Covid 19 widely regarded a leading adversary.

Whilst appreciating the level of resilience demonstrated by artists in the wake of the pandemic Russell strongly believes that urban gospel music is yet to be embraced as “real Gospel” by a good number of people.

He has exclusively told zambuye.com that the genre is “still in its penetration stages.” Russell went on by saying, “It can also be understood that religion goes with age. Urban music mainly targets the youthful generation which is still trying to explore life before fully embracing religion.”

“The industry needs good producers. We are used to gospel music which does not have beats that can go beyond borders. We prioritise message and not the beat. So we need good producers who can marry the two well,” explained Wonderful, a political scientist and philosopher.

Both writers, who also happen to be social media influencers, have also provided solutions saying challenges in the industry, on the other hand, provide entertainers with more opportunities than even before.

Russell, who continues to work with veteran Video Director, Peter Mazunda on many of Patience Namadingo’s ground breaking projects, has advice for players in the growing industry.

He suggests that artists firstly need to define themes that people can easily relate to. Warning that gospel music that is perceived as beef is, in his strong opinion, no different from secular music. On the way forward, he proposes that fusing local elements unlike exclusively doing foreign genres can help.

Nonetheless, Russell and Wonderful say fans have a huge challenge to vote for their favourite musician in the 2020 UMPAs Best Gospel Act category when organisers, Ndefeyo Entertainment call for nominations in the coming weeks.

Philosopher Wonderful, who authored Billy Kaunda’s ‘Hills & Valleys’ autobiography, which comes out on 3 November, suggests that Eliza Mpoya, Walu, Suffix and Miracle Chinga are very likely to make it into the nominees list. Though he fell short of mentioning a possible winner from four acts, Mkhutche says the artists have been exceptional in their own right.

Journalist Russell, who knows no economy of words, was very candid in his view saying Henry Masamba’s “Chaka Chokolora” is the only local gospel song that trended on both on social and traditional media. Though he concedes that the song’s life span was short-lived, Russell stands by his choice.