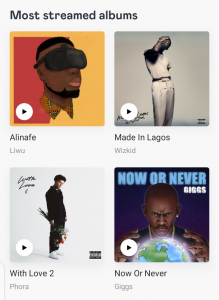 Just days after it’s release, Christian Rapper, Liwu’s debut album,Alinafe, has become the most streamed album in the region. He claims the top spot, replacing Wizkid’s latest album, ‘Made in Lagos’ who is on number 2.

Checkout what Liwu posted on his official Facebook page:

Get his album on www.getalinafe.com.
The 12 Track album features artists such as Cozizwa, Suffix, Kim of Diamonds, Beracah, Mista Gray, Kelvin Sings and David Kalilani.

Prior to this masterpiece, Lieu worked on 4 mixtapes. Liwu has managed to remain consistent in the Malawi Hip Hop scene not shying away from mature concepts in his music, while openly expressing his Christian faith.