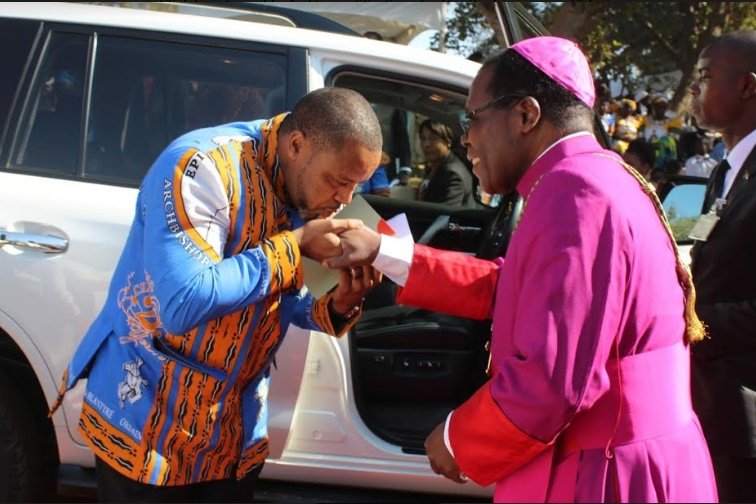 Tributes are pouring in for the late Archbishop Tarcizio Gervazio Ziyaye who has passed on in the wee hours of 14 December 2020 in Namibia.

Following his demise a lot of elite people in political circles including the state president Dr, Lazarus Chakwera have conveyed their condolences for his passing.

Joining the president Minister of homeland security Richard Chimwendo Banda has also extended his deepest condolences citing “A month ago you visited me in my office together with Ambuye Msusa . I will cherish your advice and keep it for good.”

Banda described Archbishop Ziyaye as “a humble servant of the Lord you were. Now you are gone. May God receive you in his eternal life. You have fought a good fight. What remains of you is his crown bestowed upon you in the new life. Rest in Peace Ambuye Ziyaye.”

Leader of opposition in Parliament Kondwani Nankhumwa has also described the late Archbishop Ziyaye as an achiever for serving the Catholic Church and the people of Malawi with distinction as Auxiliary Bishop of Dedza, Coadjutor Bishop of Lilongwe, among other positions he attained.

Nankhumwa said; “It is with the deepest sadness that I learnt of the death of Archbishop Ziyaye, I wish to extend my deepest sympathies to his family, the Holy Father, Pope Francis, the Episcopal Conference of Malawi, the Catholic community and the people of Malawi for this loss and I pray for peace and comfort during this most difficult time.”

“I shall always respect the late Archbishop Ziyaye for his exceptional leadership in liturgical worship in the Catholic Church and his strong commitment to the ministerial formation.I also admire him for his personal courage and selfless contribution towards the fight against the notorious one-party dictatorship under the Malawi Congress Party (MCP).”

The Leader of Opposition further explained that it was courage coupled with genuine patriotism displayed by Archbishop Ziyaye in cohort with the other famous ‘1992 Pastoral Letter’ Bishops that brought about political freedom and multiparty democracy in Malawi in 1993 and 1994.

He said; “It is for these reasons that I wish to join the entire Catholic faithful and the nation in celebrating his life and honouring his legacy. He was a great leader; ever smiling and with a kind heart.”

The Late Archbishop Ziyaye was born on 19 May, 1949 at Khombe Village, Ludzi Parish, Mchinji District. He was ordained priest on 14th August, 1977. Then he was appointed Auxiliary Bishop of the Diocese of Dedza on 21st January, 1992 and consecrated on 23rd May, 1992 at Bembeke.

During his Episcopate he held various positions ranging from being Chairman of the Episcopal Conference of Malawi (ECM) for ten years, Association of Member Episcopal Conferences in Eastern Africa (AMECEA), Public Affairs Committee (PAC), Christian Service Committee, Chancellor for Catholic University of East Africa (CUEA) and Catholic University of Malawi (CUNIMA). He was also once Chairman for the mediation talks of political parties in Malawi.