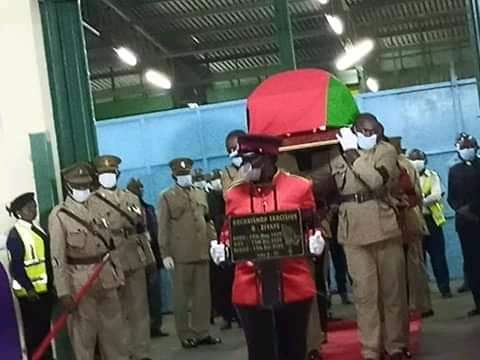 Thousands of somber filled people from all corners of the country and beyond today flocked to Civo stadium in Lilongwe to pay their last respect to the late Archbishop Tarcisius Gervazio Ziyaye.

Laid with full military honours in recognition of his distinguished service to the nation upon presidential orders, the Archbishop died in Namibia where he was taking a short holiday having succumbed to short illness with colon cancer.

Until his death, he was archbishop of for Lilongwe archdiocese of the Catholic Church and he has been laid to rest in a crypt inside a chapel in Maula Catholic Cathedral

Presenting eulogy on behalf of the Lilongwe archdiocese Monsignor John Paul described the late Ziyaye as a hero who always priorities welfare of people and agendas of the church.

Monsignor John Paul said; “Its not only the Catholics that are mourning the late Archbishop Ziyaye, but almost all people in diverse sectors are grieved over his passing, clearly signifying how generous and accommodative the archbishop was in the service of people and God.”

“He was a man of caliber who fully submitted his life towards the works of God, and he served in spirit and truth, as he usually emphasized that walking in truth and integrity  is a fundamental principle of life required for a person to serve God genuinely.”

He also added that the late Ziyaye also played a crucial role in uniting catholic members with their leaders, fostering charity activities within and outside the church which he affirmed to remain practiced in commemorating his life.

“Our late Archbishop was a visionary leader who always ensure that positive strides are taken in improving the services of the church among others he has left us with a project whereby we are constructing new cathedral for Lilongwe Archdiocese and renovation of Likuni cemetery where parish priests are laid, henceforth we pledged to continue with these projects despite his passing.”

And chairperson of the Episcope Conference of Malawi (ECM) Archbishop Luke Thomas Msusa urged Malawi’s leadership to emulate good leadership skills portrayed by late Ziyaye through the leadership positions he attained during his episcopate.

According to Archbishop Msusa, late Ziyaye was a true reflection of servant leadership to everyone despite persons, political, religion, tribal or social background.

“The late Archbishop taught us that a true leader is one who priorities the needs of his people and bringing justice where there is no justice disregarding the position or nobility of the one found operating outside of the law.”

In his remarks President Dr Lazarus Chakwera emphasized that the death of late Archbishop Ziyaye is a huge blow to Malawi considering his myriad contributions towards development of Malawi especially fostering multi-party democracy and ensuring that local citizens are well represented.

Dr Chakwera said; “the late Ziyaye was not for Catholics only, or Malawi only but he served and transform lives of many people in the world proved by how everyone here expressed oneself in commemorating and reflecting how they get to know the late Ziyaye and how he impacted their lives.”

“As for me he was my mentor, and even before I joined politics I used to pay him a visit to tap more knowledge on leadership and other critical principles and for these reasons and many more I will surely miss him.”

President Chakwera therefore urged the Catholic Church to continue working hand in hand with government in promoting welfare of Malawi’s citizens as advocated by the late Ziyaye.

The Late Archbishop Ziyaye was born on 19 May, 1949 at Khombe Village, Ludzi Parish, Mchinji District. He was ordained priest on 14th August, 1977. Then he was appointed Auxiliary Bishop of the Diocese of Dedza on 21st January, 1992 and consecrated on 23rd May, 1992 at Bembeke.

During his Episcopate he held various positions ranging from being Chairman of the Episcopal Conference of Malawi (ECM) for ten years, Association of Member Episcopal Conferences in Eastern Africa (AMECEA), Public Affairs Committee (PAC), Christian Service Committee, Chancellor for Catholic University of East Africa (CUEA) and Catholic University of Malawi (CUNIMA). He was also once Chairman for the mediation talks of political parties in Malawi.