“Lyrical beast” and “Versatile” are some of the words, among many, that a section of Malawi’s top record producers has used to describe their experience working with Liwu ahead of today’s local release of his debut star bungled album ‘Alinafe’.

The producers, who include veteran and pioneer, Q Malewezi, award winning DJ Sley and the sensational Chizmo have each told zambuye.com that they generally had a great time working with the Lilongwe based musician on the 12-track project.

Q produced the instrumental to ‘Chimfana’ one of the songs on the album. He says the beat came out a decade ago and was later brought to the attention of Liwu following a recommendation from peers.

“I had no idea that he was working on album and he recently sent the song for me to check it out and it’s fire,” said Q describing the ‘Broken jenes’ hitmaker as a “lyrical beast.” The soft Q went on to state that he is more than honoured to be on the project.

Interestingly, Sley also strongly believes that Liwu is a “beast” among the best. Captivated by the musician’s humility and level of calm, Sley, who co-produced ‘Winning’ which also appears on the album said: “He is undeniably one of the best lyricists of our generation.”

Just like Q, Sley also took a more down to earth approach saying that he feels honoured to have worked with Liwu as he looks forward to more engagements with the musician, who is influenced by the likes of Jay Z, Lupe Fiasco, Nas, Big L, Shai Linne and Evangel.

Taking his turn, Chizmo said he had a good experience working with Liwu on ‘Game time’, which is fourth on the album’s tracklist.

Explained Chizmo: “He heard the beat and wrote on the spot. Then we did a few revisions to some items. The record producer further heaped praises on Liwu saying the rapper is versatile and full of surprises.

Manifest was the main producer and mastered the album.

A day after it came out the album hit the second spot on Deezer’s most streamed albums in the southern Africa region next to South Africa’s AKA. 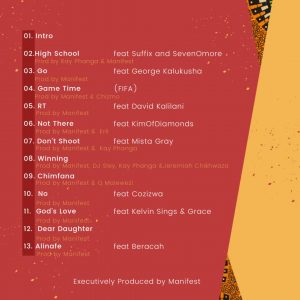